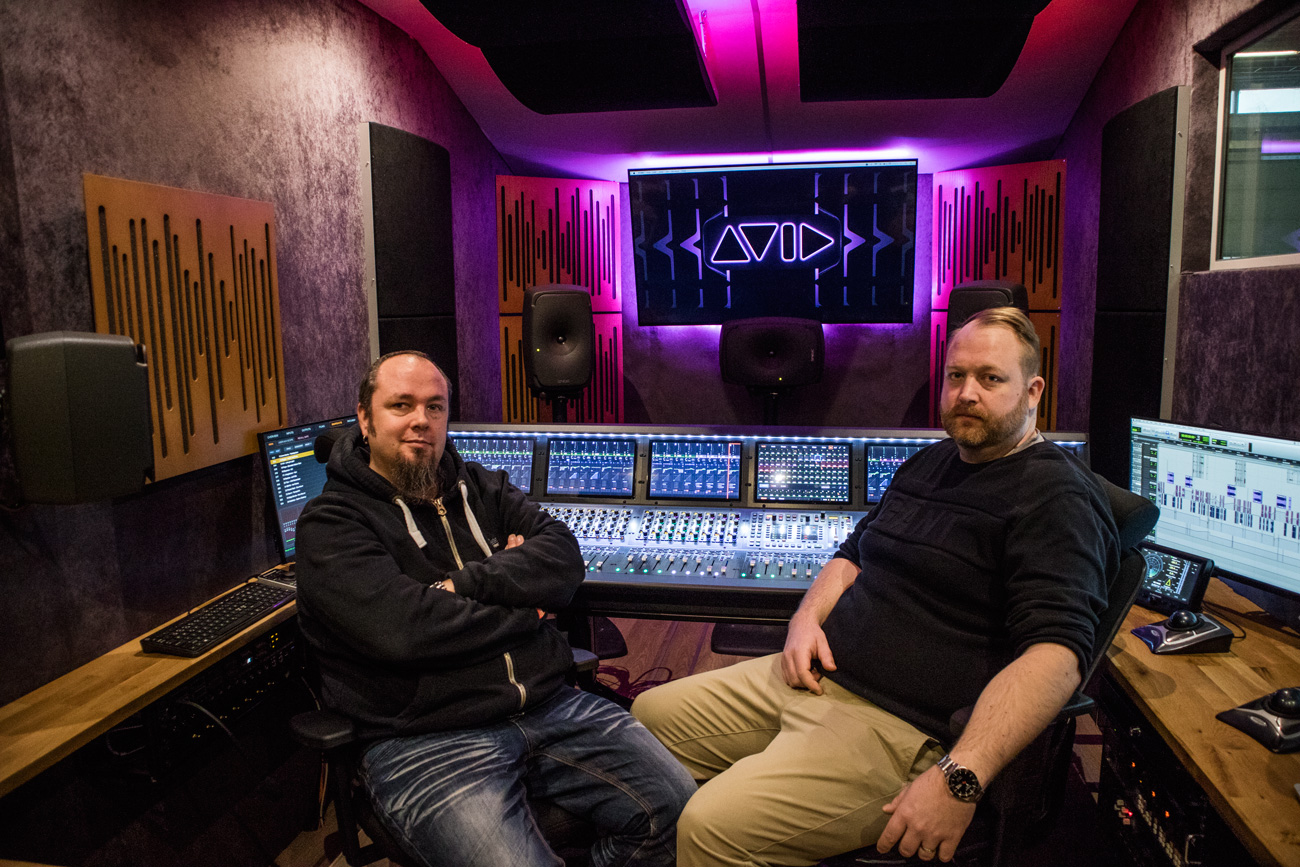 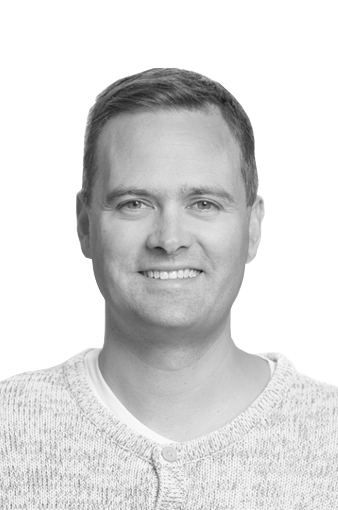 The sound production professionals of Soundon, Timo Virtanen and Jonas Törnblom, are warmly inviting yet enthusiastic as they welcome us to the Soundon sound truck. You can tell from Timo’s voice that they have been waiting for this chance to talk about their latest Avid addition.

Soundon focuses on sound production for music and entertainment productions. Their biggest project at the moment is The Voice of Finland, Finland’s most popular singing contest with almost a million viewers. The new Avid VENUE | S6L-48D live mixer has been put to the test, not only on The Voice of Finland, but also in the live broadcast of the Finnish national sports gala Urheilugaala. Next projects in line include the sound production of the music show All Together Now, the mixing of the last live show of singer Juha Tapio at Hartwall Arena and the sound work on the live concert of the popular TV show SuomiLOVE.

”As soon as we heard that Avid was releasing the S6L-48D live mixer, it was clear that we wanted it. We called Ossi and got the S6L-48D for the start of the new season of The Voice of Finland, just as we planned. The advantages have been remarkable. Everything is so easy with the S6L-48D”, Timo Virtanen describes.

The biggest advantage to Timo has been that every essential thing can be seen instantly while looking at the Avid VENUE | S6L-48D live mixer. The whole experience is more visual.

”With the S6L-48D I have more things visible at the same time. For example, on The Voice of Finland, I have the band on the left side and the coaches on the right. In the battle section of TvoF all 48 faders were in use. Everything had to be in view, as the coaches on the show talk to each other and might, for example, ask the band to play something on the spot. The mixing engineer needs to stay awake.”

”To mention a downside, now I have to reach farther. Before, the kick drum was right here, now it’s really far away”, Timo laughs.

Timo says the sound quality of the VENUE | S6L-48D is his favorite feature.

”It has a great sound and the clarity is top notch.”

He also emphasizes the importance of the S6L’s preamp.

”I noticed the excellence of the VENUE | S6L preamp while working on the TV show Elämäni Biisi. I had recorded and mixed ten episodes of the first season with the S6L and through the Avid preamp. After that, we did an episode with the same setup, same band and same mics, but I had to route the signal through a Yamaha preamp via Dante. The difference between the sounds was like night and day.”

”Before the S6L-48D we worked by switching from layer to another, although we had an Avid S6L-32D already. The productions are so big these days that it would be rare for 32 faders to be enough for any band”, Jonas says.

”Nine years ago, TvoF was the biggest production in Finland and all the equipment was at its limits. Live setups were limited to 48 inputs per band, as that was all we had at the time”, Jonas explains.

”All in all, bigger productions are more plentiful and they’re still growing”, Timo adds.

In addition to TvoF, lately Soundon has been working on the hit shows SuomiLOVE, Tanssii Tähtien Kanssa and Elämäni Biisi. Soundon’s biggest projects measured by channel amount have been the SuomiLOVE live concert and the last live show of the famous Finnish rap artist Cheek.

Timo Virtanen and Jonas Törnblom have been making sound production on The Voice of Finland from the very first season. Now, on the ninth season, the sound system created by Soundon is larger than ever. The whole sound system, including front of house sound, camera recordings, audio post processing and live sound is done by Soundon. The front of house sound is achieved with the help of partners. Getting the new Avid VENUE | S6L-48D live mixer on board the massive TvoF production was critical for Soundon.

All The Voice of Finland rehearsals are recorded, and Lenni-Kalle Taipale, the music producer of the show, listens to the recordings before the dress rehearsals.

”It is important that we can do changes to the mix before the dress rehearsals if the music producer so wishes. Everything can be perfected before the artist arrives on the stage. It’s essential for the production,” Timo says.

Avid’s virtual soundcheck feature is not unique, but Jonas tells us what makes Avid’s version special.

”Avid’s S6L live mixer and the Pro Tools software are constantly communicating. With other mixers you have to matrix the channels back to the console in a different way. With the S6L-48D, this is not a concern.”

Timo adds: ”With Pro Tools and VENUE | S6L, all I need to do is press one button. I can control everything straight from the console.” 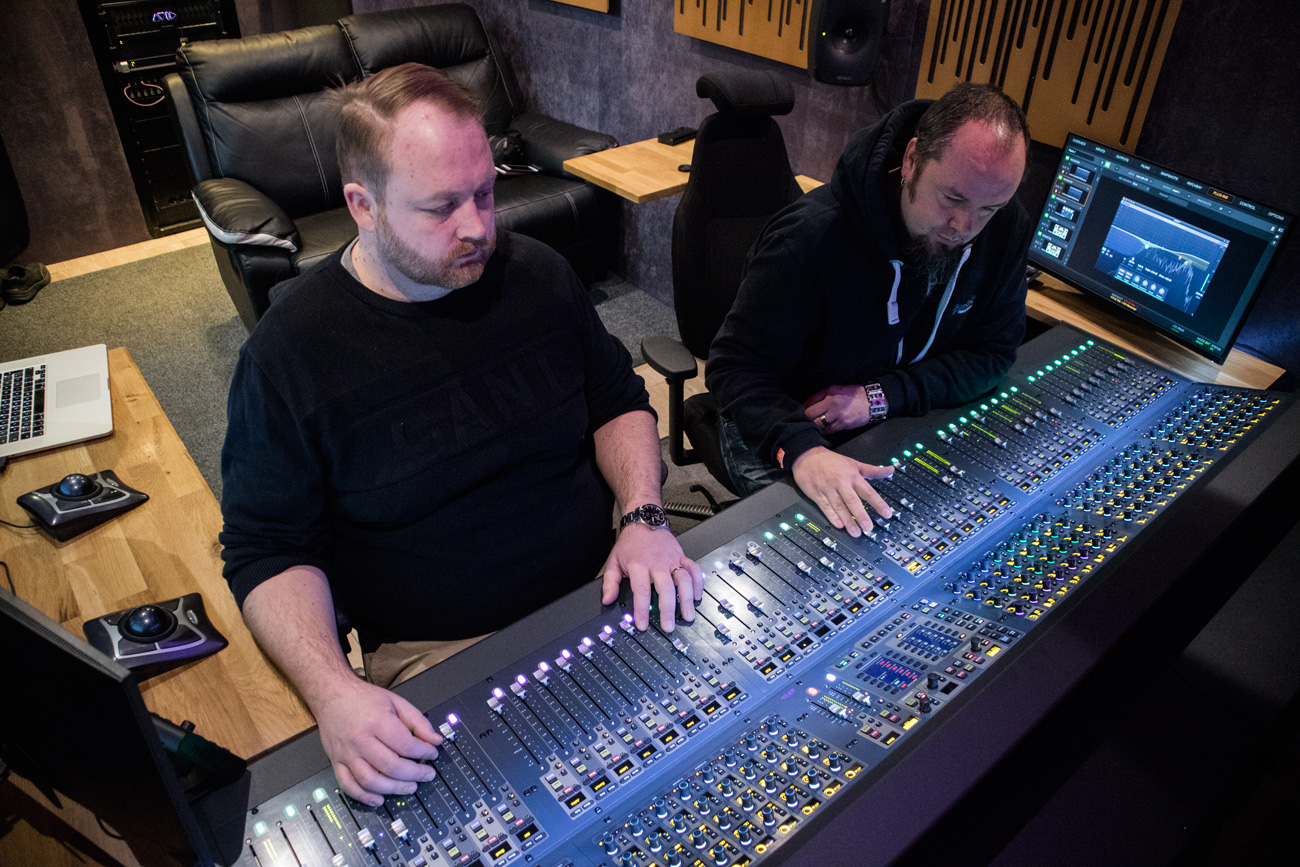 The long, shared journey of Timo and Jonas can be heard during the interview. They are constantly adding to each others sentences and thoughts. They first met over 20 years ago at the set of Jyrki, a popular Finnish music show at the time. Timo was studying at TTVO at Tampere, where he also first encountered Avid Pro Tools. Jonas, on the other hand, was studying media and started his career with sports productions. Timo moved on from his music career and started focusing on FOH mixing, and now he has worked on TV productions for 21 years. Their strong focuses on different parts of sound complement each other. At Soundon, Jonas focuses on speech and the roles of chief engineer and sound assistant, while Timo deals with the music.

Dual Operator is one of the new features of the S6L-48D.

”Dual Operator is useful for us in projects where one recordist does the speech and the other deals with the music. We can split the mixing console for both speech and music and work together on the console at the same time.  The main idea is that the music recordist can focus on music and the speech recordist on speech”, Timo sums up.

Before this feature was introduced, shows like SuomiLOVE were done with Timo in the sound truck dealing with the music and Jonas in another car working on the speech. Now everything can be done in one truck. Exchanging ideas is easier when you sit side by side at the mixing table.

”We don’t have to shout through the intercom anymore”, Timo laughs.

”While Timo has previously summed all bowed instruments and choirs to FOH sound, Dual Operator could also be used with summing in large projects.”

RELIABILITY IS ESSENTIAL IN LIVE PRODUCTIONS

Live productions are Soundon’s main focus. There can be no system crashes or silent periods when you have an audience of millions.

In The Voice of Finland the sound is brought directly to a splitter that splits the signal into three stageboxes: to the Soundon sound truck, monitors and the front of house. Soundon’s sound truck is connected to the Avid Stage 64 racks in the house via fiber. Inside the truck the sound is fed to two instances of Pro Tools running on Macbook Pros. The other receives the sound over AVB and the other through an Avid MTRX.

”Although the redundant recording feature introduced in the VENUE 6.1. software makes it possible to run two Pro Tools systems over AVB, we wanted to make things extra secure. Due to the MTRX the two systems are totally separated”, Timo describes.

The sound is always recorded to Pro Tools and mixed. If the broadcast is live, then mixing is also done live. Timo only uses Pro Tools to play back material.

”I do everything on the console. At most I’ve done some gain automation or special effects to vocals on Pro Tools.”

Jonas specifies that Soundon has no so-called ”mouse mixers”. Every engineer mixing music at Soundon has the same basic workflow: everything is done on the console before moving to Pro Tools. ”This way the risks are smaller if Pro Tools would happen to crash”.

The functionality of plugins also has to be guaranteed. In addition to Avid’s own plugins, engineers at Soundon use, among others, the McDSP Live Bundle, Sonnox Live 2 and Arousor by Empirical Labs.

”We can’t afford for our setup to crash due to wrong plugins when there are a million people watching at home. Plugins have to be reliable.”

”Arousor is an amazing compressor. When we got that, I slowly started adding it everywhere. In the vocal chain I usually also have the dynamic EQ by Sonnox. From the McDSP bundle I’ve used, among others, their multiband compressor and the NR800 due to the loud lights on the set.”

”Someone once told us that we will never need another DSP card, that one is more than enough. But, lo and behold, last year we were in need of another. That took about two years. Cheek’s live show in Lahti was the breaking point, as there were so many channels during that show that the DSP met its limits. We also have the second DSP card in use on TvoF”, Jonas says. 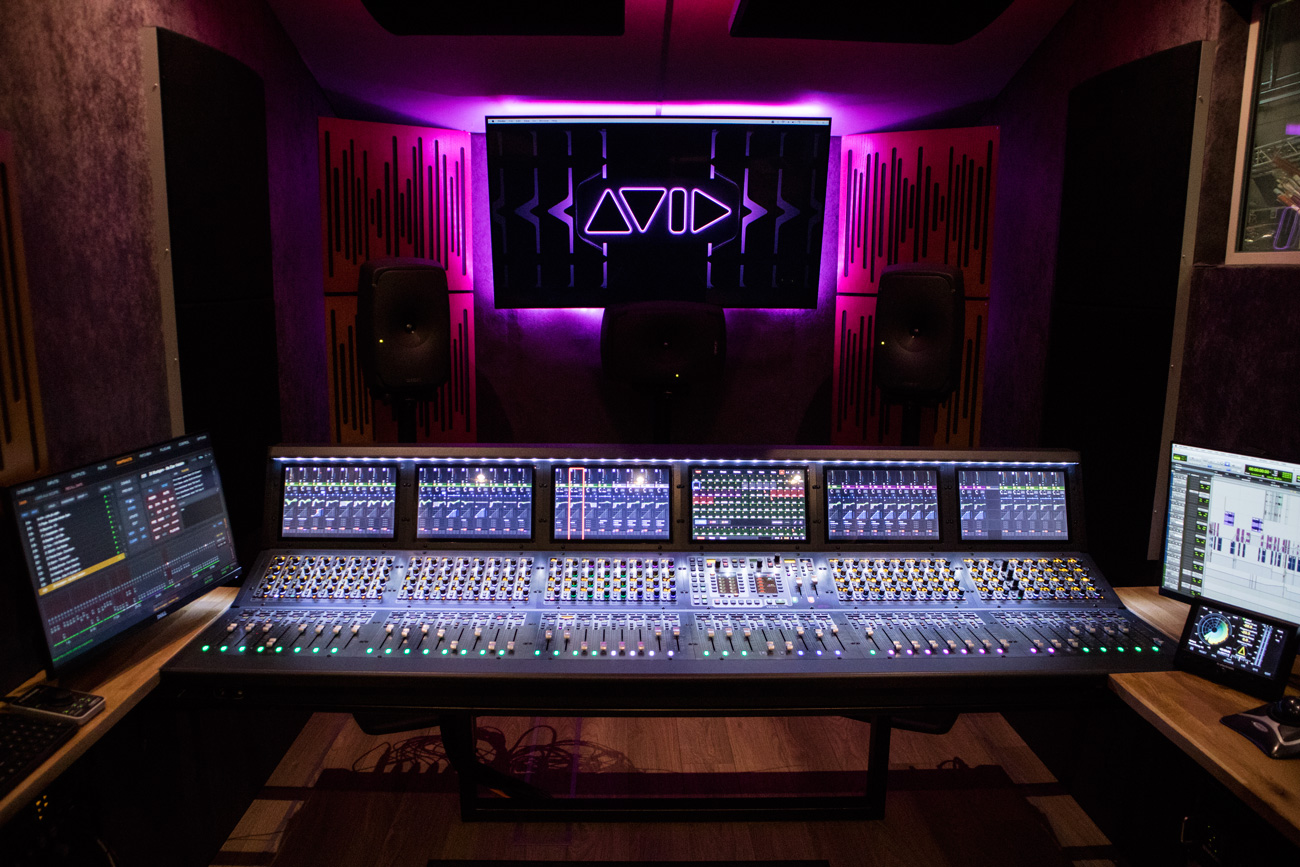 Soundon focuses on music and entertainment productions, and the need for broadcast features on the console hasn’t really come up. The S6L-48D is excellent in these productions. Jonas and Timo are eagerly waiting for the next S6L version. ”I think we’ll find use for an even bigger console”, Timo says.

WHEN PRODUCTIONS OVERLAP, IT IS IMPORTANT THAT THE EQUIPMENT MEETS THE NEEDS

Soundon used one Avid Stage 64 rack full of channels while recording the battle section of TvoF. Another Avid Stage 64 rack was in use in Helsinki at the Urheilugaala at the same time, meaning that no racks had to be disassembled although the productions overlapped.

”We need double the fiber, double the stage boxes and double the mics in order to do two productions at the same time without swapping equipment between them. And we still run out of gear. Luckily you can always get more”, Timo laughs.

Soundon uses the Avid MTRX on many productions, including the show All Together Now. The Avid product line offers Soundon the flexibility to do various productions in a versatile manner. Soundon uses, among others, the HD Native, the Pro Tools | S3 control surface and the brand new Avid S1 controller, which is used for audio post production.

”The S1 is so small! It is so convenient, you can take it to the hotel room with you. S1 instantly became a part of my arsenal. A laptop and the S1 is all you need to do post work in the hotel or at home”, Timo rejoices.

”We also still have the S3 control surface in use. When we have two productions in the post production phase, Timo uses the S1 here in the truck and Soundon’s third sound engineer, Jussi Tervo, uses the S3 elsewhere”, Jonas specifies.

The support provided by msonic and Avid gets praise from Timo and Jonas.

”The support at msonic and Avid has been excellent and very important for us. The screen of our previous mixing console broke once. I called msonic and they tried to solve the problem right then and there. When that wasn’t possible, I got a new screen the next day.”

”Easily attainable support is essential, especially when we’re doing productions with a lot of listeners”, Timo sums up.